This submission comes to us from Daniel Giron, an environment artist who used Megascans to tremendous effect with this fantastic cave. When we first saw this cave pop up on our social feed, our jaws hit the floor.

Here’s Daniel with how he went about putting this scene together: 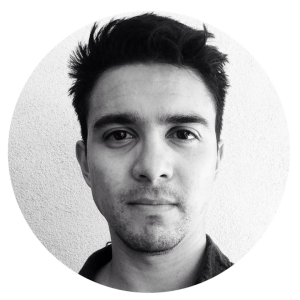 My name is Daniel Giron. I’m a matte painter and environment artist in the VFX industry. I worked at studios such as Double Negative and Atomic Fiction and on films like Star Trek: Beyond and Pirates of the Caribbean. I was inspired to create a jungle environment after a vacation spent in the lush jungles and caves of Costa Rica. I thought it would be a great personal challenge to recreate my experience there. Here is my process using Autodesk Maya, V-Ray (Chaos Group), and Quixel Megascans. 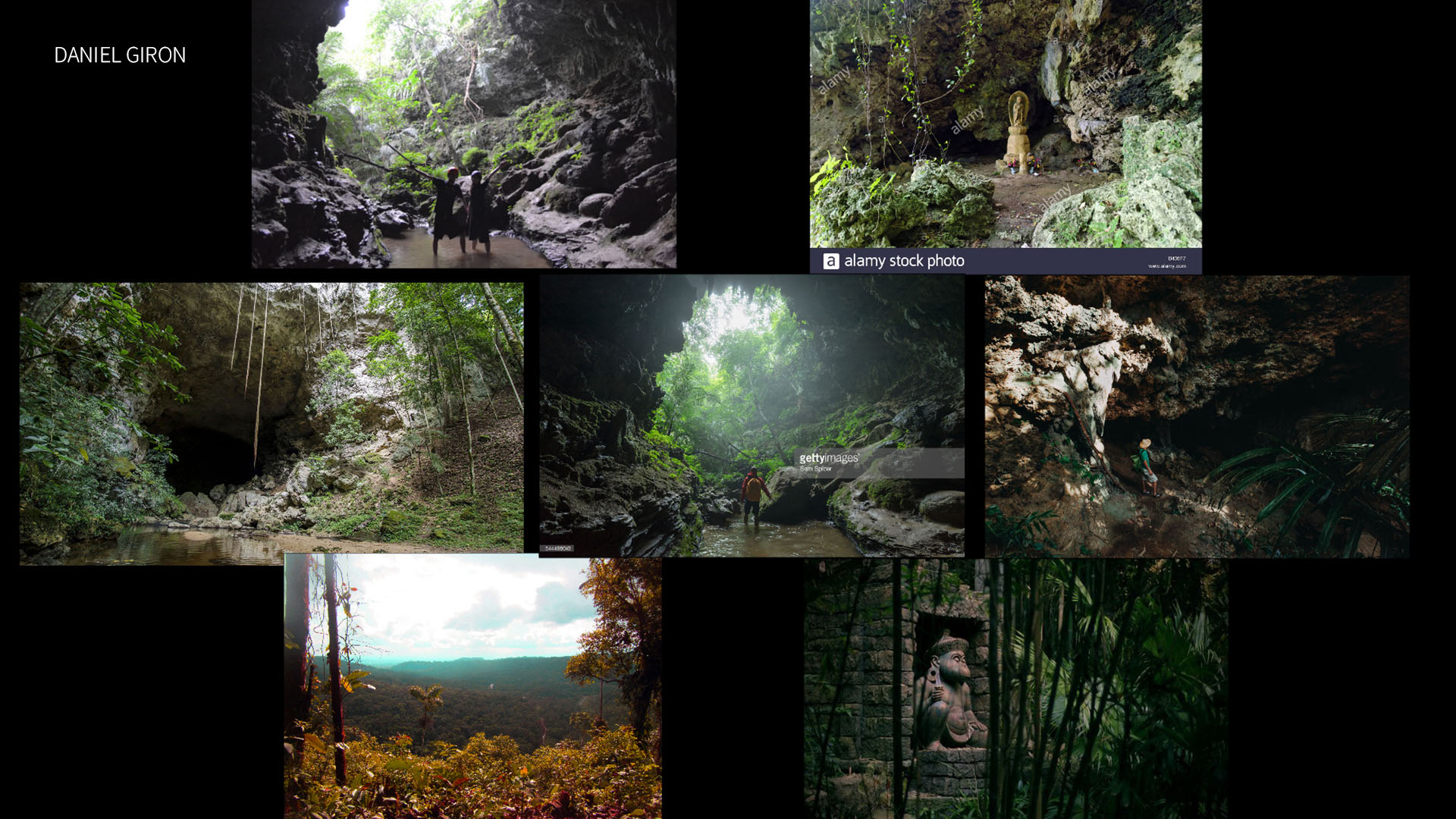 The first and most important thing for most VFX projects is a photographic reference. Being able to observe and study details is critical to photorealism, especially for matte paintings and CG environments. Paying attention to how a vine grows with smaller vines growing over it, or how reflective a rock surface in a certain environment is for instance, are key details.

Setting up the scene 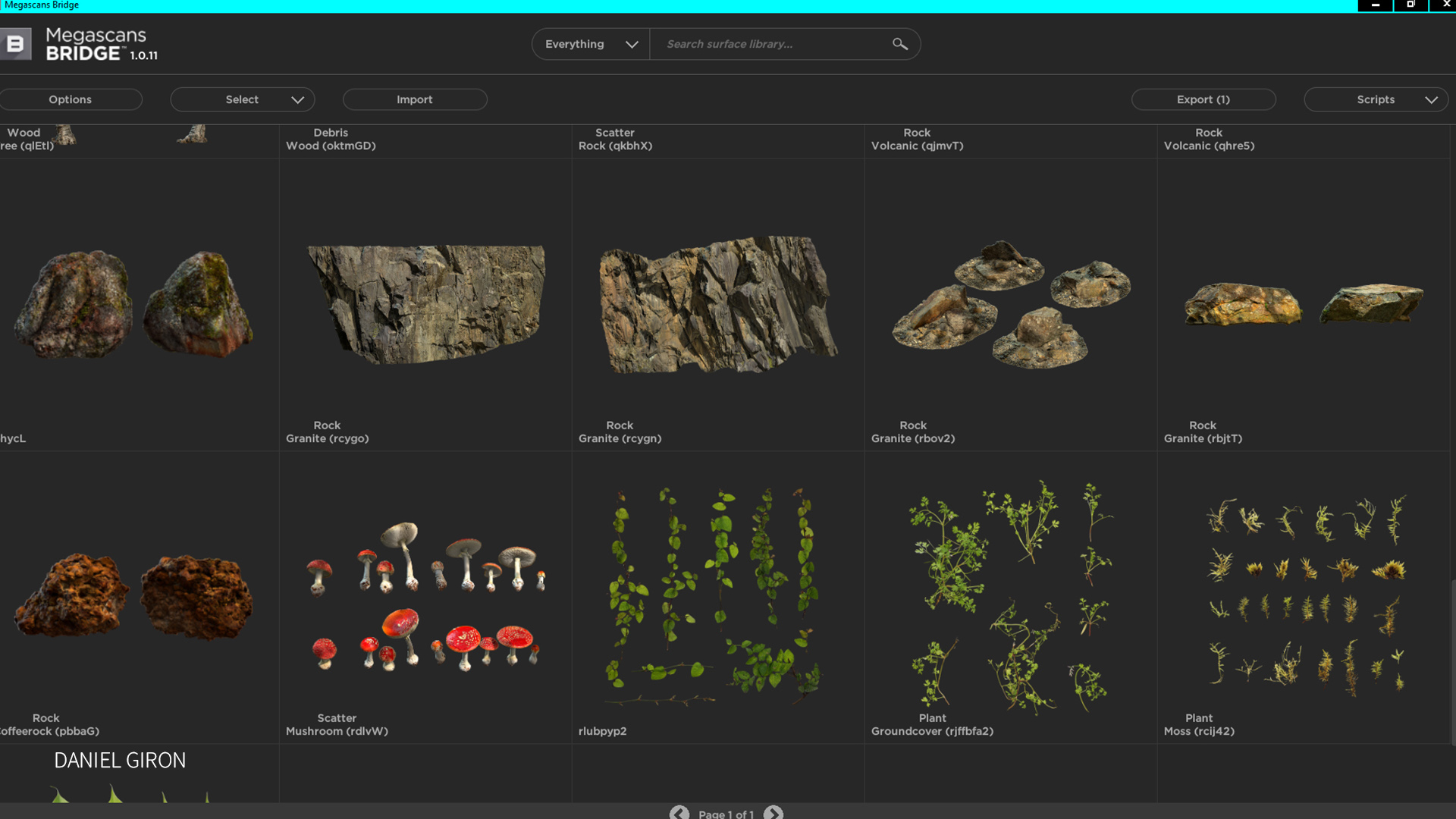 This is one of the more difficult aspects of a project, made simpler with Megascans Bridge. Since I knew I would be dealing with a lot of Megascans assets in my project, I made sure to have a simple naming convention to help keep track. I set up most of the shaders and textures manually, but that also helped me fine-tune the look. 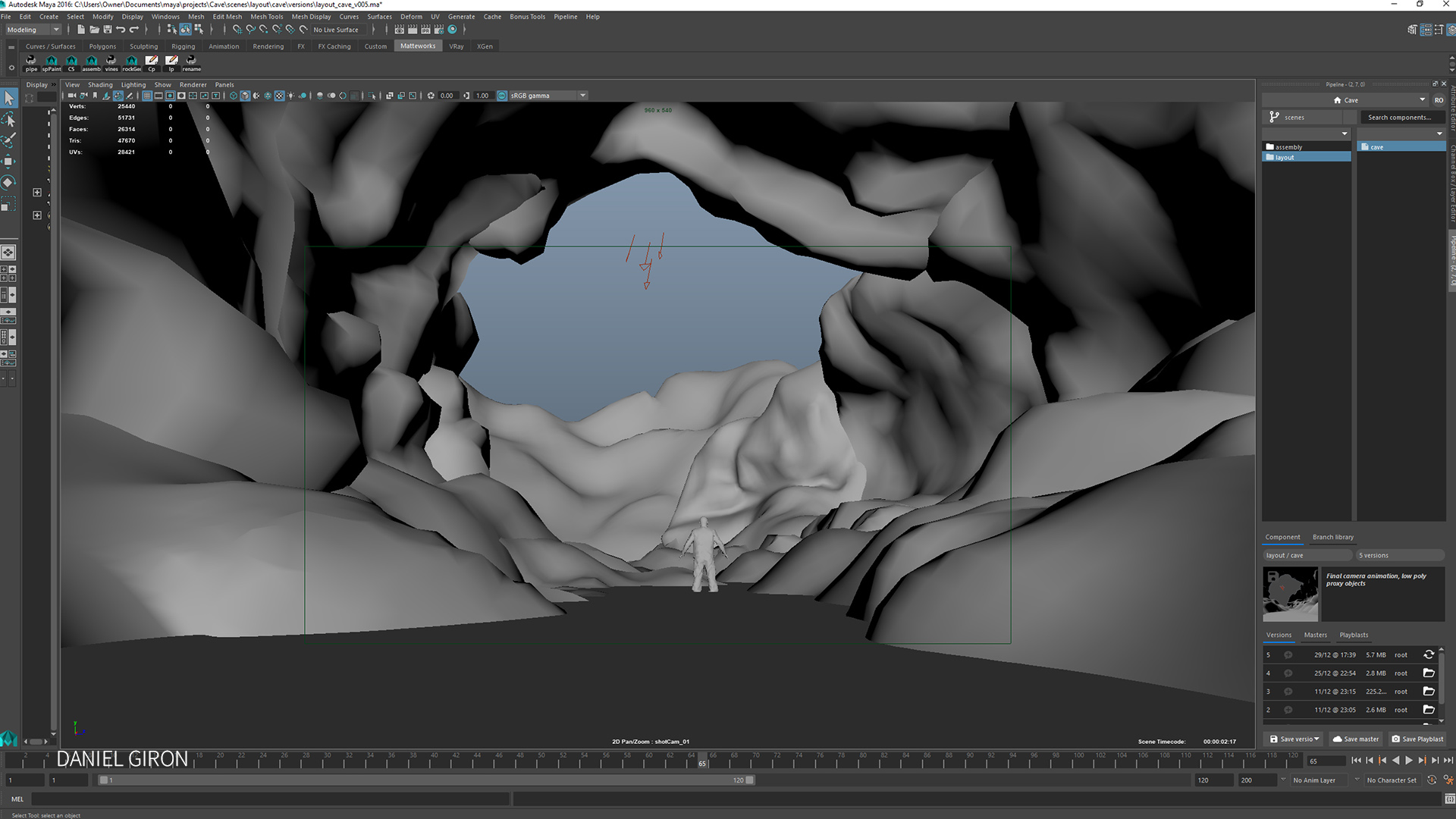 Using Maya 2016, I very quickly created simple poly planes and used the ‘sculpting’ tool to push and shape geometry. I did an automatic UV to have it ready for sculpting. I made sure to lock down the camera early on as well. I decided to build out the cave into 4K chunks — which is easier to manage than one large geometry — and allows me to duplicate and populate the scene when needed. 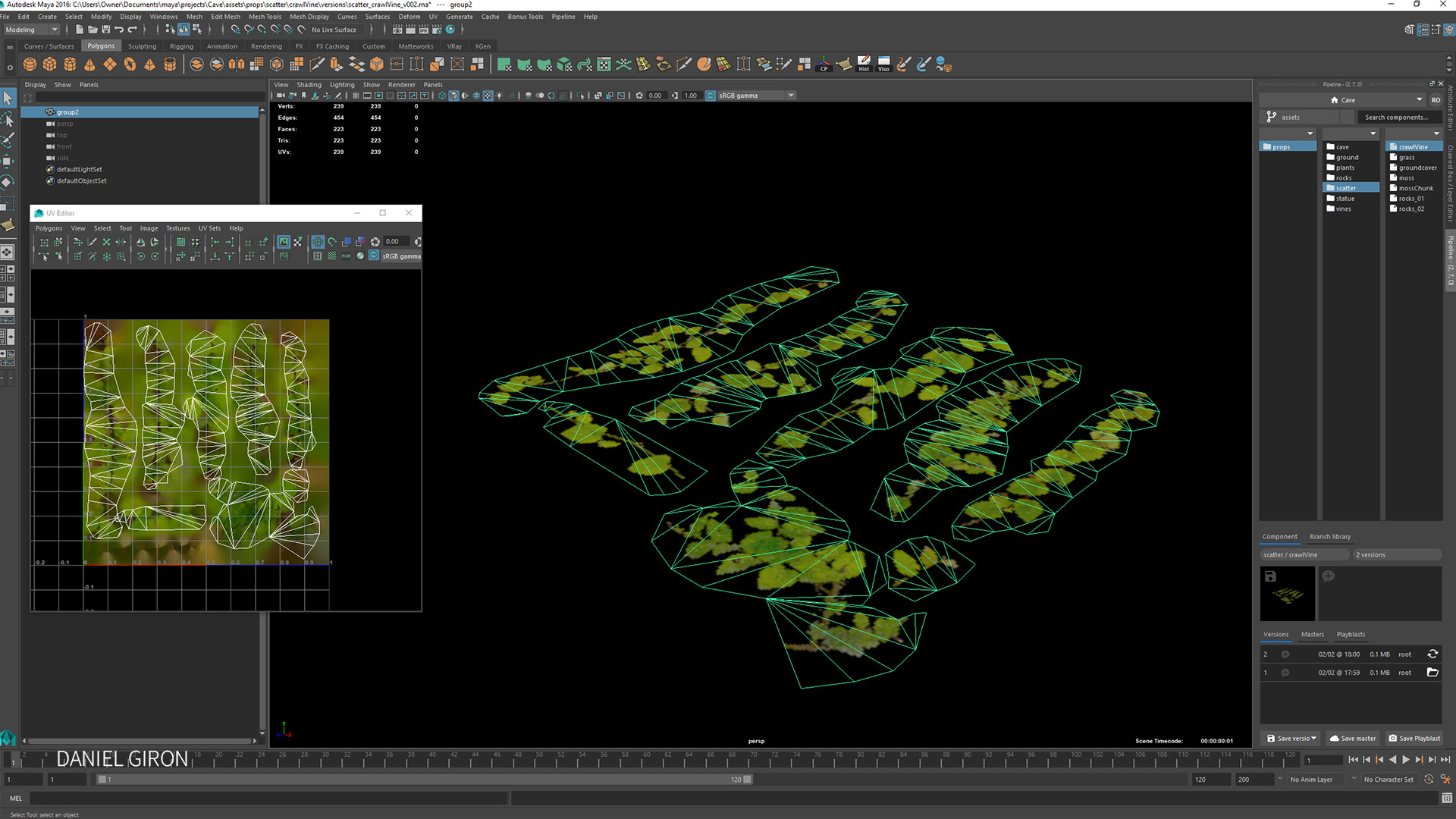 Atlases are a great feature of Megascans, as it greatly cuts the time it takes to create plant textures. In Maya, I create a simple plane and map all my textures to it in the shader. I then make it a ‘live surface’ and use the ‘create polygon’ tool to quickly outline the element. Afterwards, I combine all the pieces and create a camera-based or planar map (you may need to adjust the UVs). Use the ‘triangulate’ tool to add polys to the mesh if you are using displacements. 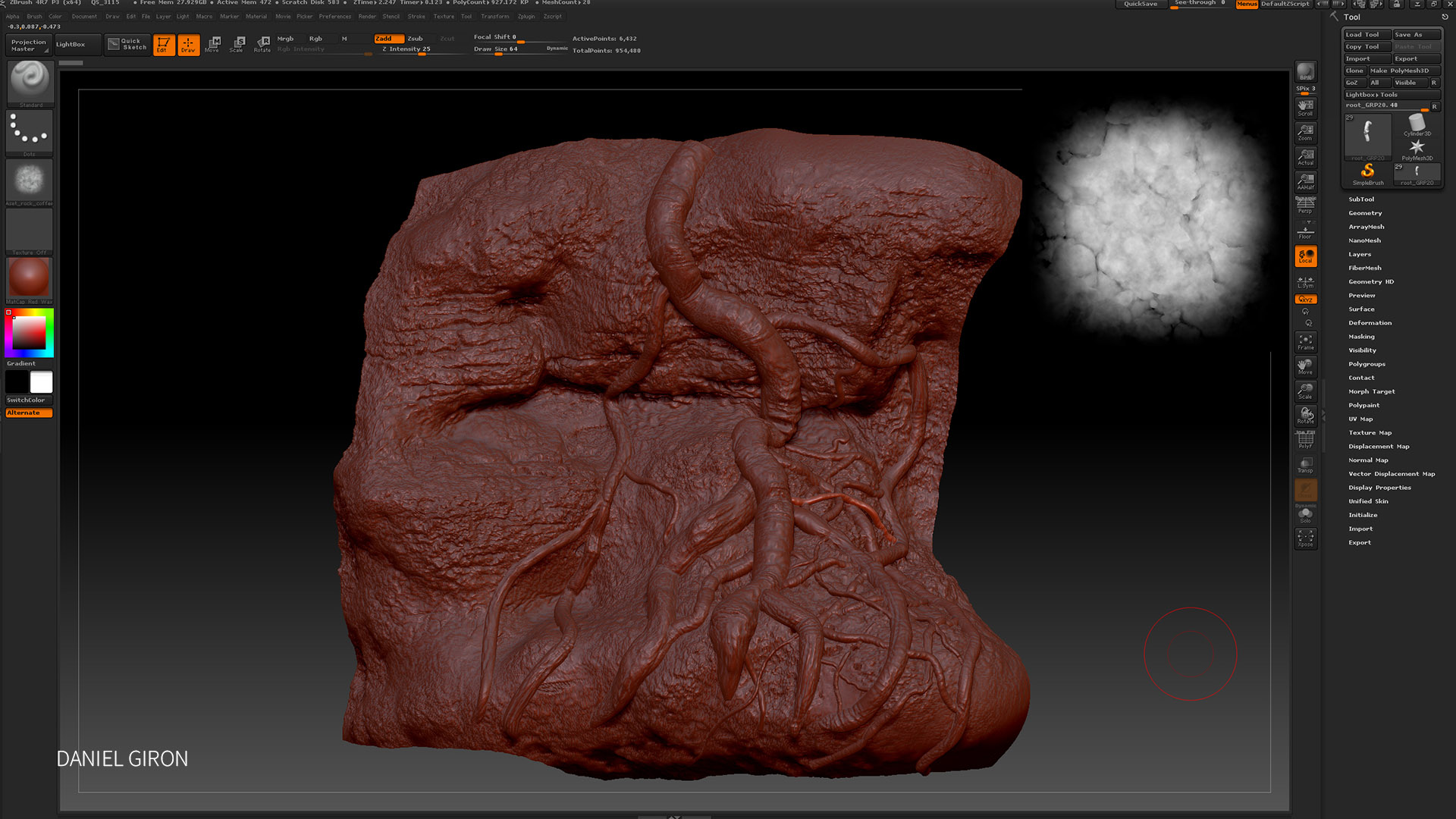 For the cave walls, I used ZBrush with the alphas that come with most of the Megascans rock packs [now referred to as ‘collections’]. Since I sculpted most of the base shapes, I subdivided and added surface details and cracks using the standard brush and stamp. I exported the geometry at high-res but did not go over 400K polys, to keep it manageable. 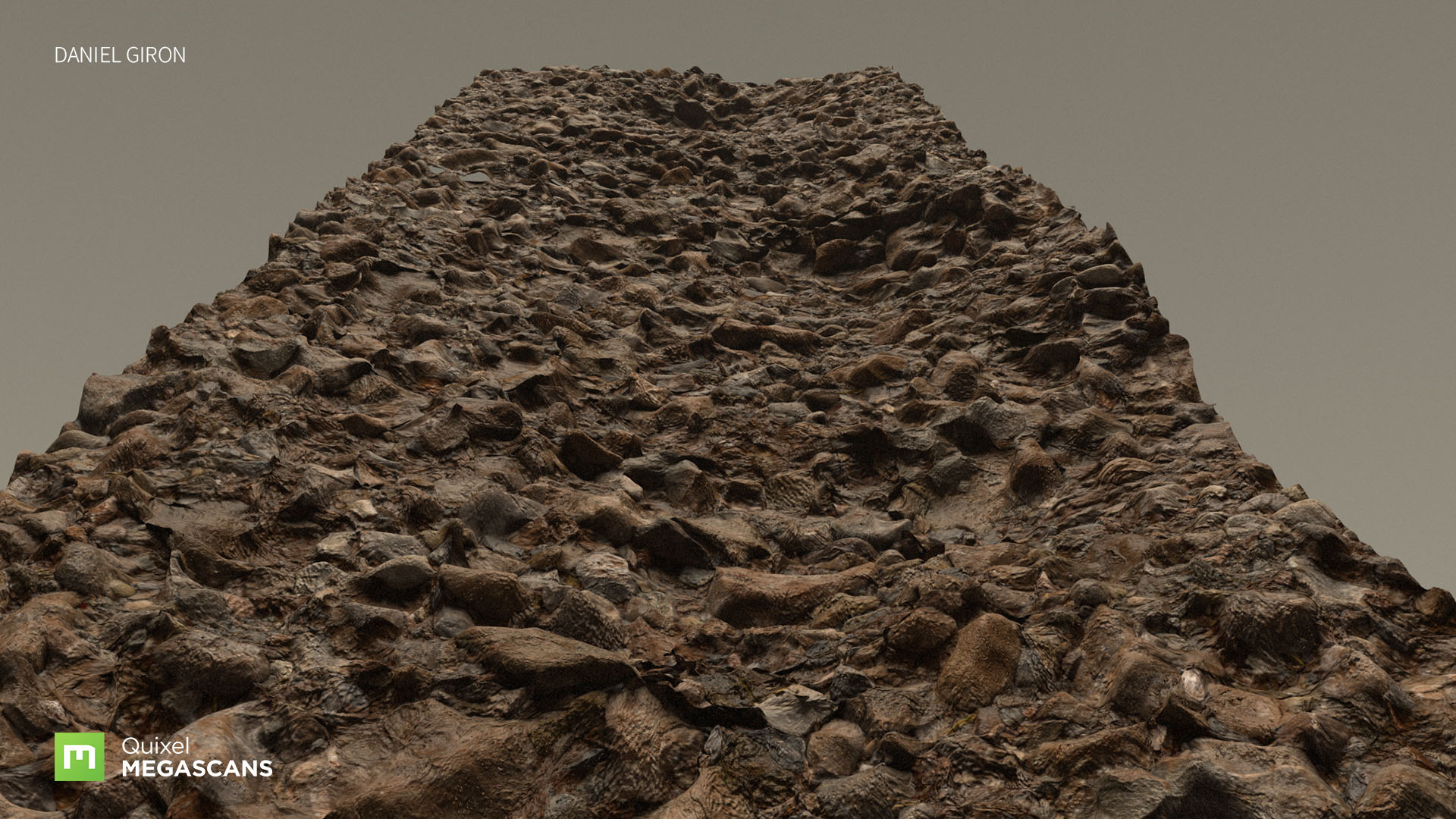 For the riverbed, I used the Megascans stone surface with displacement and a long-sculpted plane. I used 2 UDIM and tiled it to fit more resolutions since I’m limiting myself to 4K. I then re-mapped the specular map for a wet look. 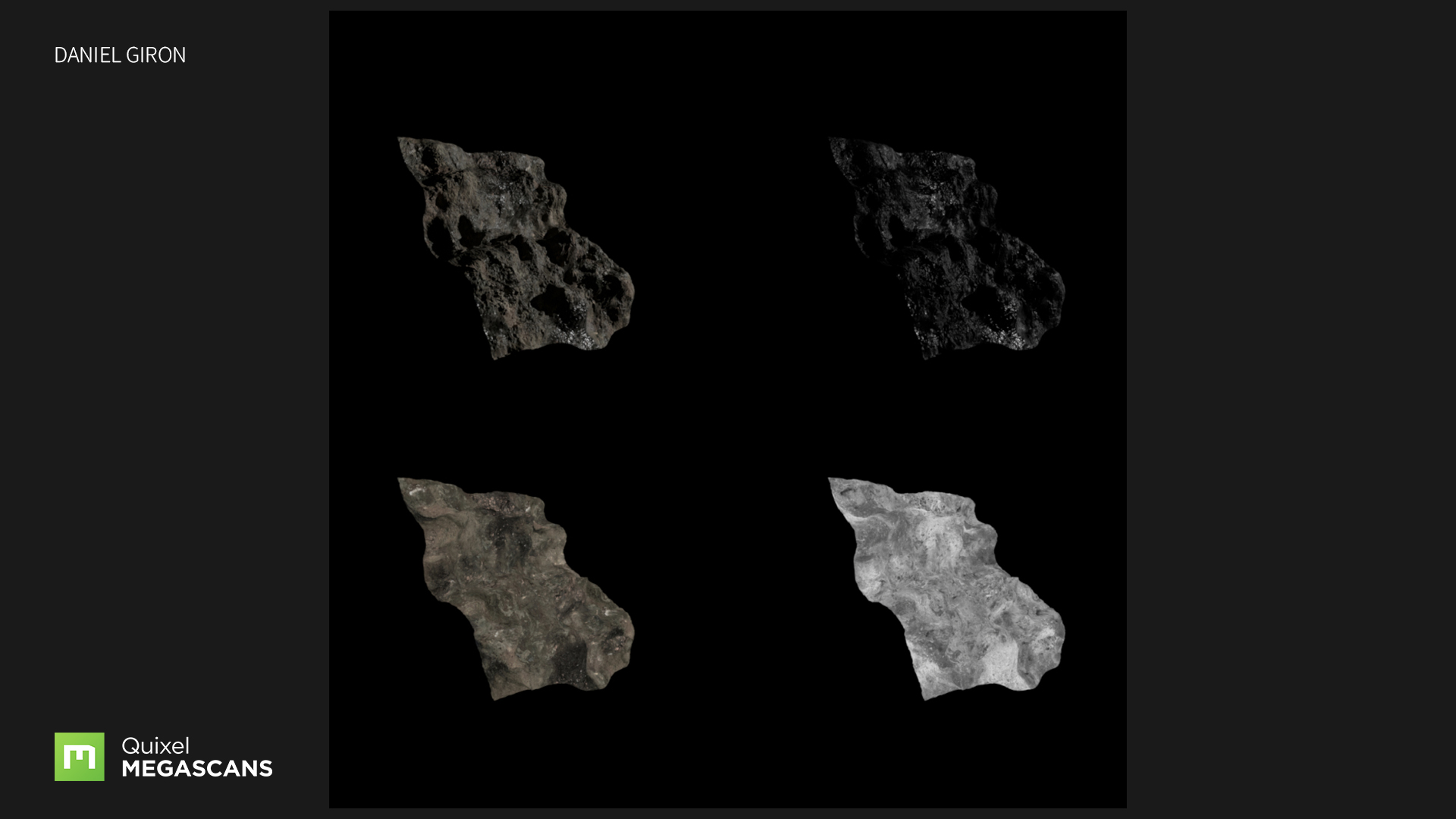 Megascans surfaces were a big help as I was able to keep consistency using volcanic diffuse maps and normals from cracked granite. 4K textures were enough to keep render times down and letting most of the details come through the sculpt. I converted the diffuse to spec and punched up wet areas using remap or HSV utilities during look development. 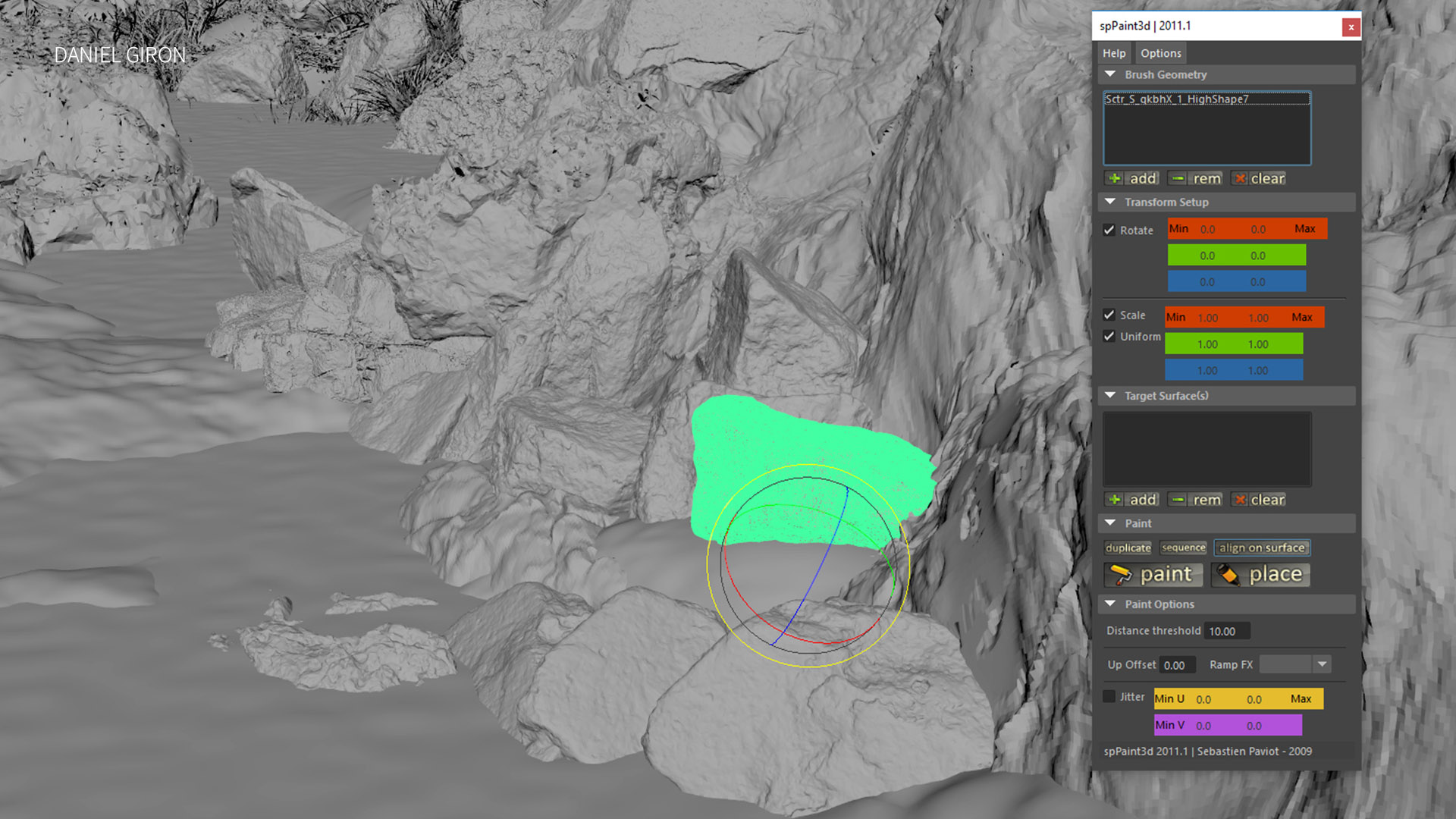 After all my assets were prepared and organized, I then referenced them into the master scene. This helps keep the scene manageable, and will automatically update to any changes I make. Once the props were in the scene, I used ‘create proxy’ in the V-Ray menu, I select ‘automatically create proxies’, which keep all the shaders connected, and is ready for use. I use a script called spPaint3d (a free tool), and then loaded the object and chose a surface to scatter on. Make sure to add variation by using rotation and scale. Be sure to choose the duplication, not instance, or it won’t show the shaders. You can further edit the transforms afterward if needed. 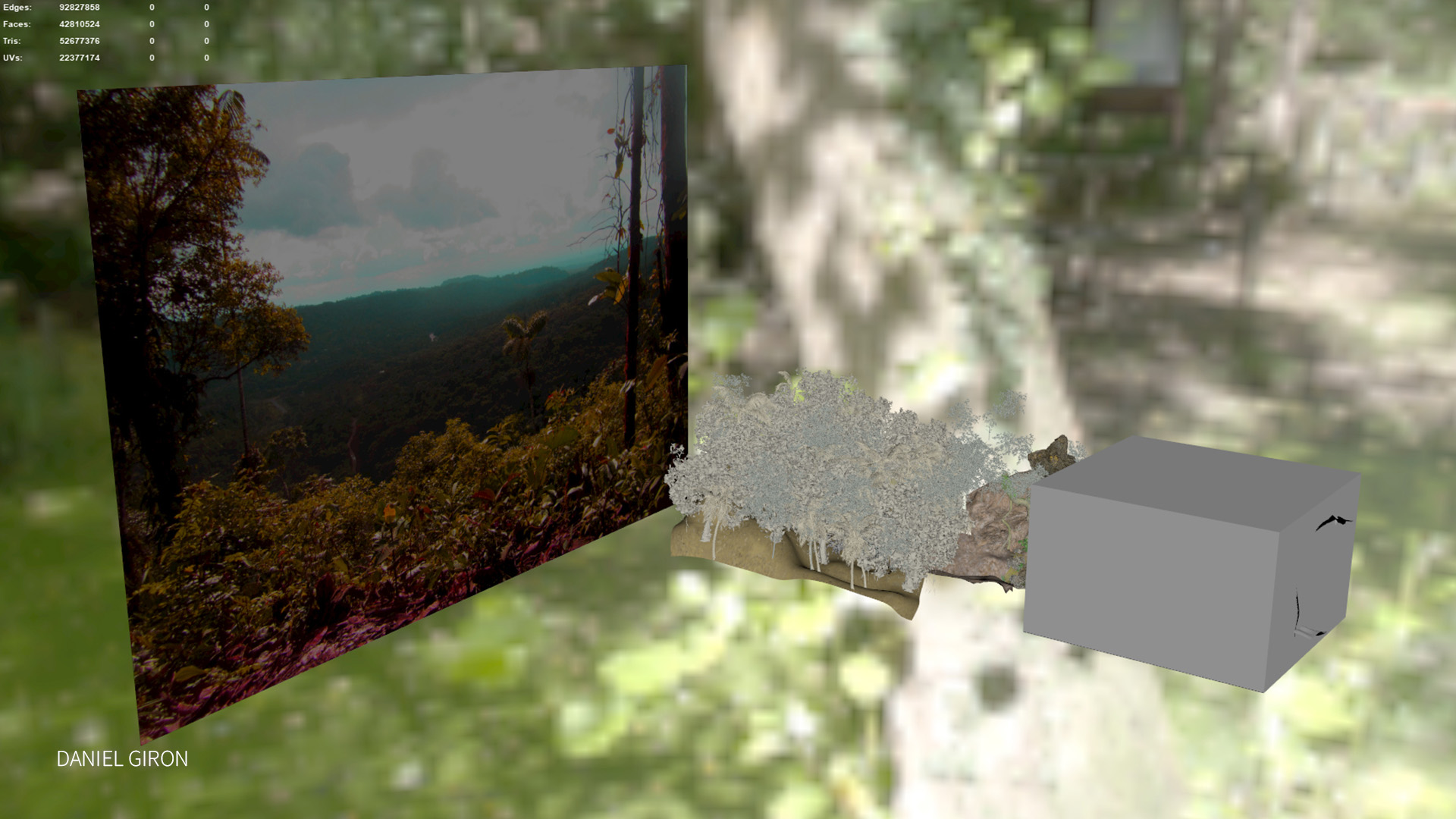 I wanted a moody atmosphere for my scene. The feeling of being inside a dark space with the sunlight cutting through the fog was the challenge. For the light,  I used a light dome and area light, with a nice HDRI of a forest I set the dome to 0.9, and the key with no decay at 5.5 at 64 samples. I used a V-Ray environment fog at about 0.2-0.3, at 512 scatter bounces to reduce noise. A simple cube light blocker around the cave made sure there were no light leaks. Using a physical camera also helped give it a photographic feel by tweaking the ISO and shutter speed. A backplate of a cloudy sky helped sell the background. 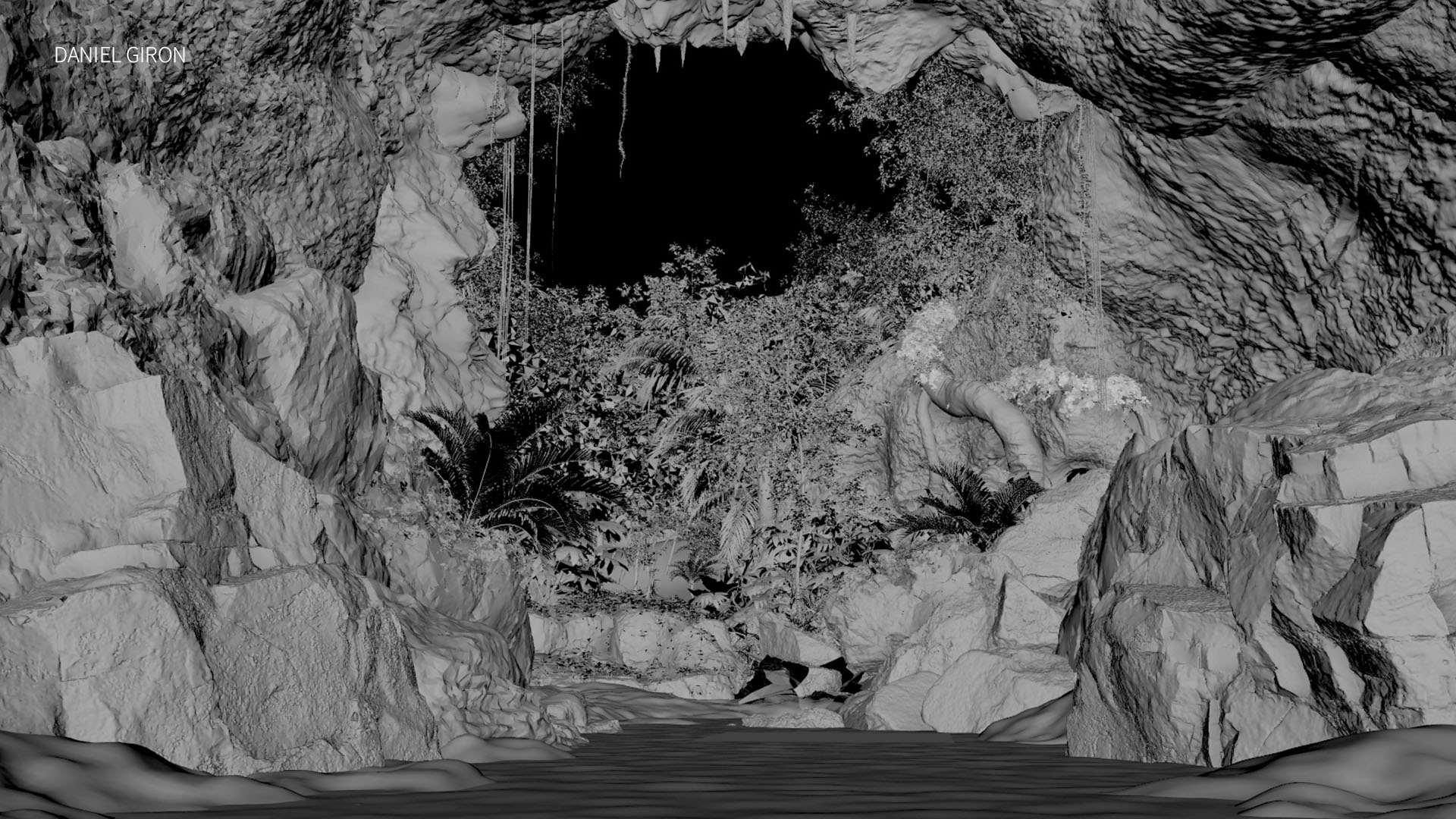 I kept my sampler type to 24-rate adaptive, (min/max 1/4) with a threshold of 0.08 and GI with brute force/light cache at 1920 light cache subdivisions. I was able to keep my render time at about 45 minutes per frame on a 40 core machine. 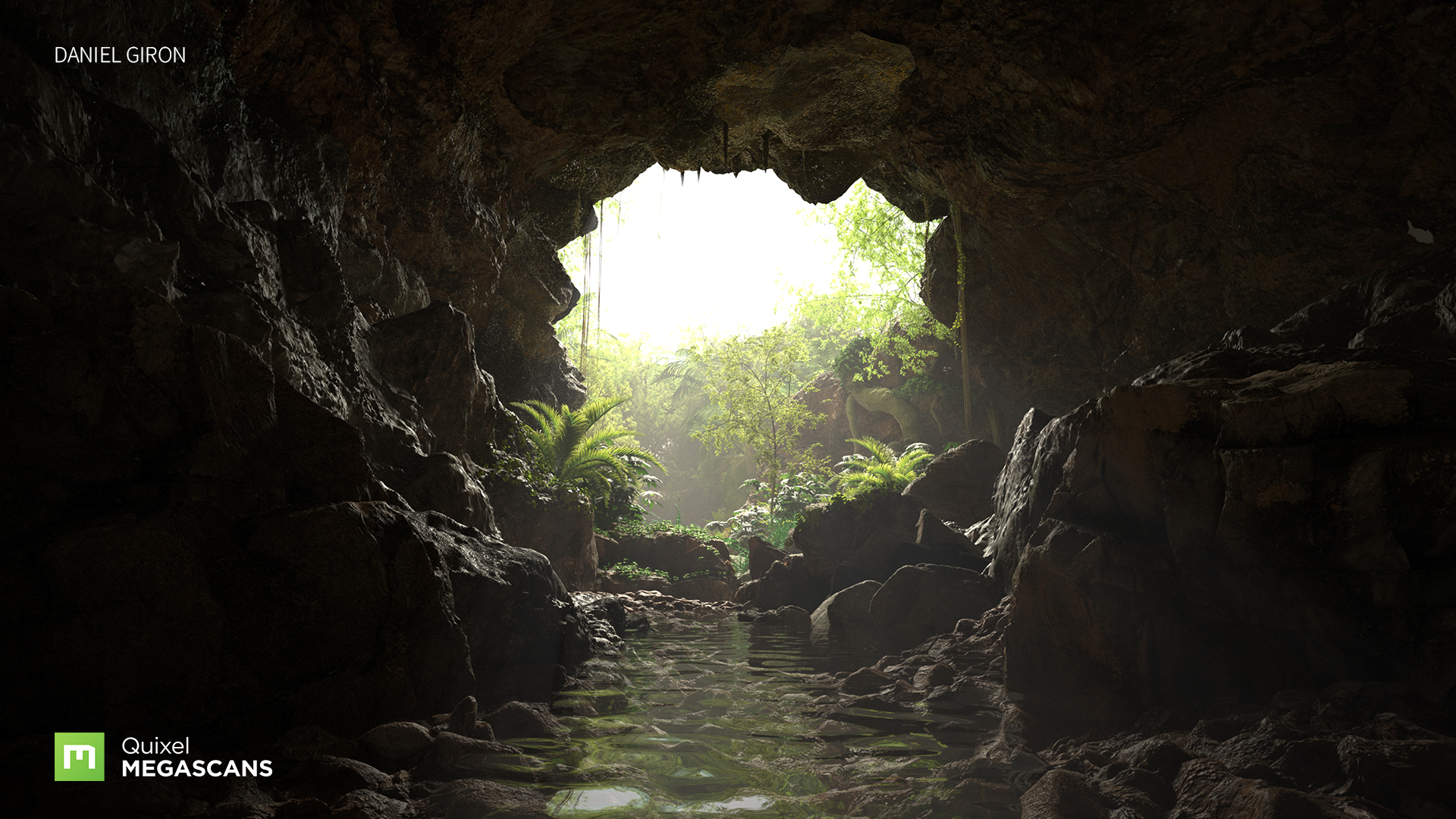 Megascans is an amazing resource. The ability to quickly create realistic nature is an invaluable resource. I hope you enjoyed this breakdown.

Do you have a Megascans-infused project you’d like featured? Send us a write-up, with a little bit about yourself and your project, along with hi-res images to blog@quixel.se.