Reimagining Shadow of the Colossus with Quixel Megascans

Few titles in all of gaming have inspired the love that Shadow of the Colossus did on the PlayStation 2 back in 2005. And so, when Sony Interactive Entertainment announced a remake for the PlayStation 4, expectations were very high indeed. Enter Bluepoint Games, the masters of remasters, who took on the challenge of reimagining this adored title for current-gen audiences.

But 2018’s Shadow of the Colossus is no mere remake and more of a thoughtful meditation on what a game can deliver on a visual and emotional level. The world that Wander traverses is now front and center as a character all its own. And with the limitations of 13 years ago behind us, all eyes were on the environments of this reimagined world. 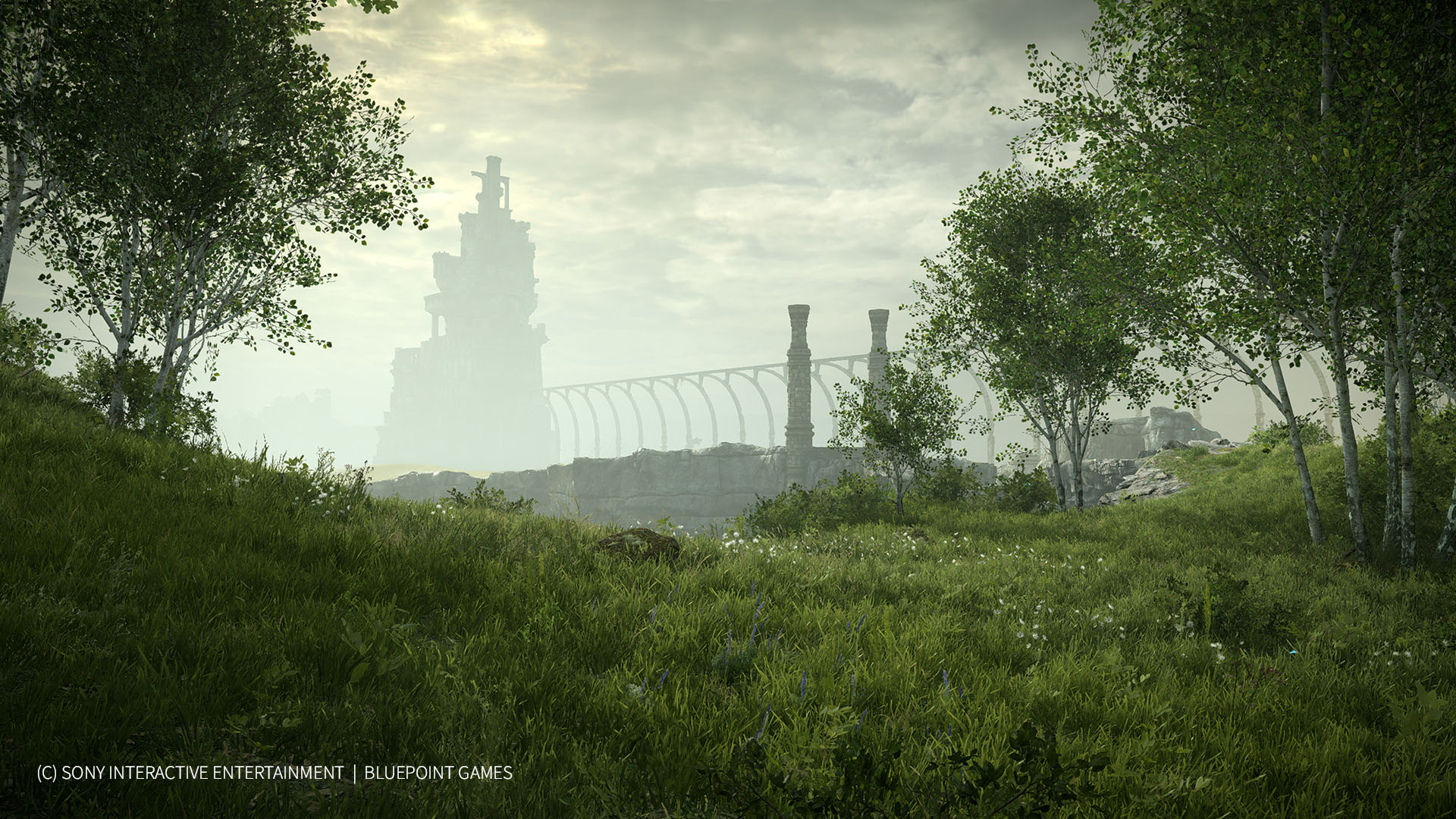 This would be a daunting task for any team of environment artists. Which makes it all the more impressive that this nimble team’s primary vegetation artist was able to create almost all the assets and textures needed for the updated Shadow of the Colossus remake on her own.

Her name is Alexis Boyer, environment artist at Bluepoint Games, and an avid user of Quixel Megascans.

While technical efforts laid the groundwork for the grass and other procedural foliage, Alexis was primarily responsible for vegetation, and the driving force behind the asset creation for most of the outstanding results. She was also directly involved in the technical achievements that allowed for these results.

We had the pleasure of speaking with Alexis on her work on SotC — and had her break down for us the many elements of this production where Megascans helped streamline and beautify the workflow.

“My name is Alexis Boyer and I was the artist solely responsible for vegetation on the recently released Shadow of the Colossus remake. I’ve been working in games for over 5 years now, including a number of titles such as ReCore, Epic Mickey 2: The Power of Two, gaining an honorable mention on Middle-earth: Shadow of Mordor, and working on quite a few handheld ports.”

Q: As the primary vegetation artist on this ambitious production, what were your biggest challenges when working with the team to conceive this re-stylized world? Was Megascans able to address these challenges?

AB: “I think the sheer volume of vegetation that needed to be created was probably the biggest challenge. Shadow of the Colossus is built kind of like a theme park. There are a lot of biomes that merge together in ways that may not necessarily be realistic. There are areas in the game where dense forests blend into sandy deserts. Because of the multitude of biomes, there were quite a few very specific needs for these areas. We really tried to make sure that the areas seemed unique — and vegetation played a big role in helping define that.

Being the only artist creating vegetation, it started out being extremely overwhelming. We had this world that was mostly natural environments and just one person to create the assets for it. I think for any artist this would be an intimidating task. Thankfully, I had access to Megascans to assist in the production.” 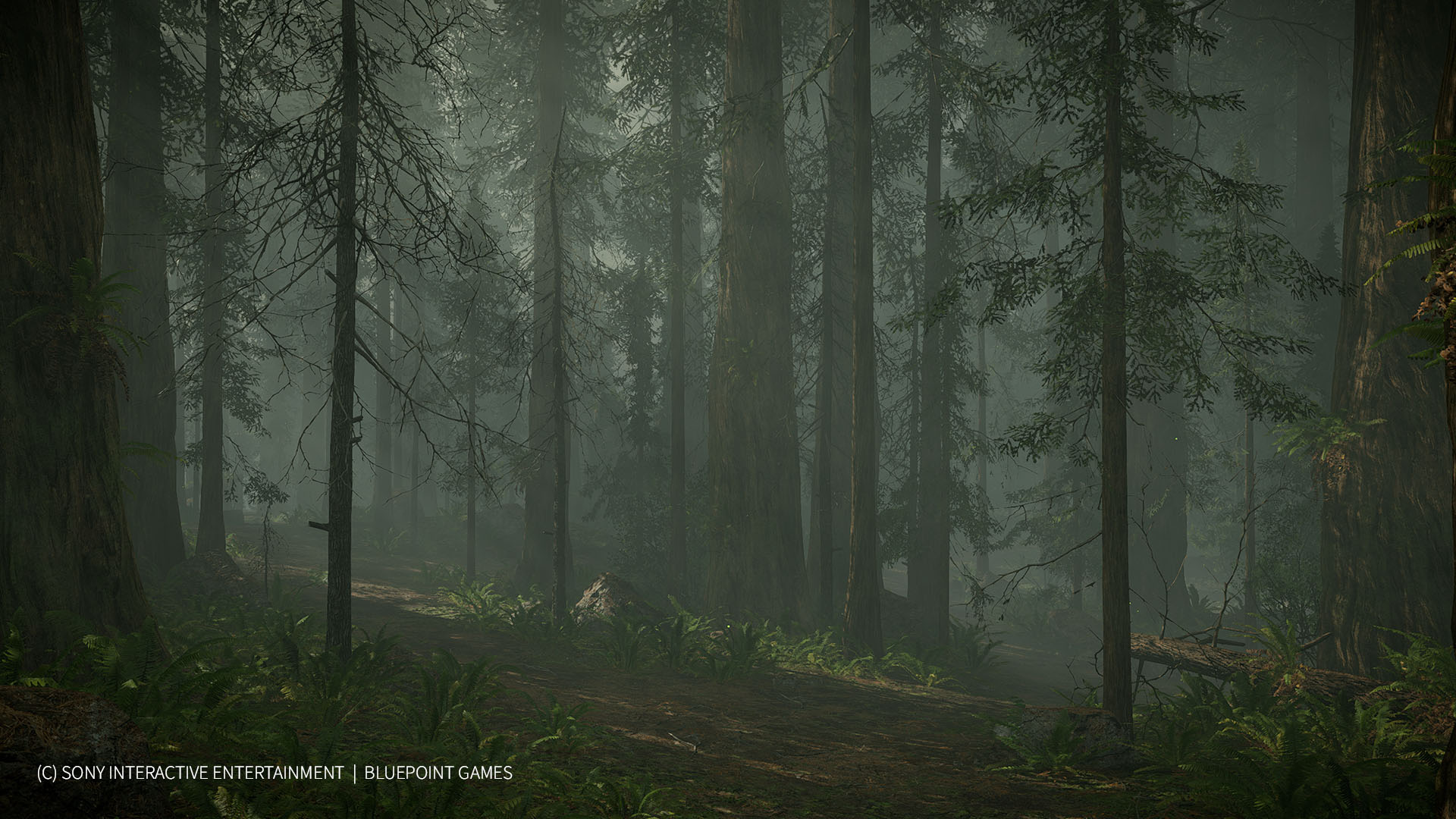 Q: Was Megascans able to give you the freedom to run with any artistic choice that sprang to mind? Did you feel enabled to give complete expression of your ideas?

AB: While I was working on the Shadow of the Colossus remake, the library was much smaller than it is now. Even back then, I was able to create most of what I needed without having the exact correct atlas. If you combined Megascans atlases and 3D scans together, you get some pretty excellent results. I did this to create the grass and a lot of the branches used for trees in the game; arranging them in Maya and then baking them down to a new atlas. From there, I could create hundreds of new individual branches that you probably never would have known started out as Megascans. 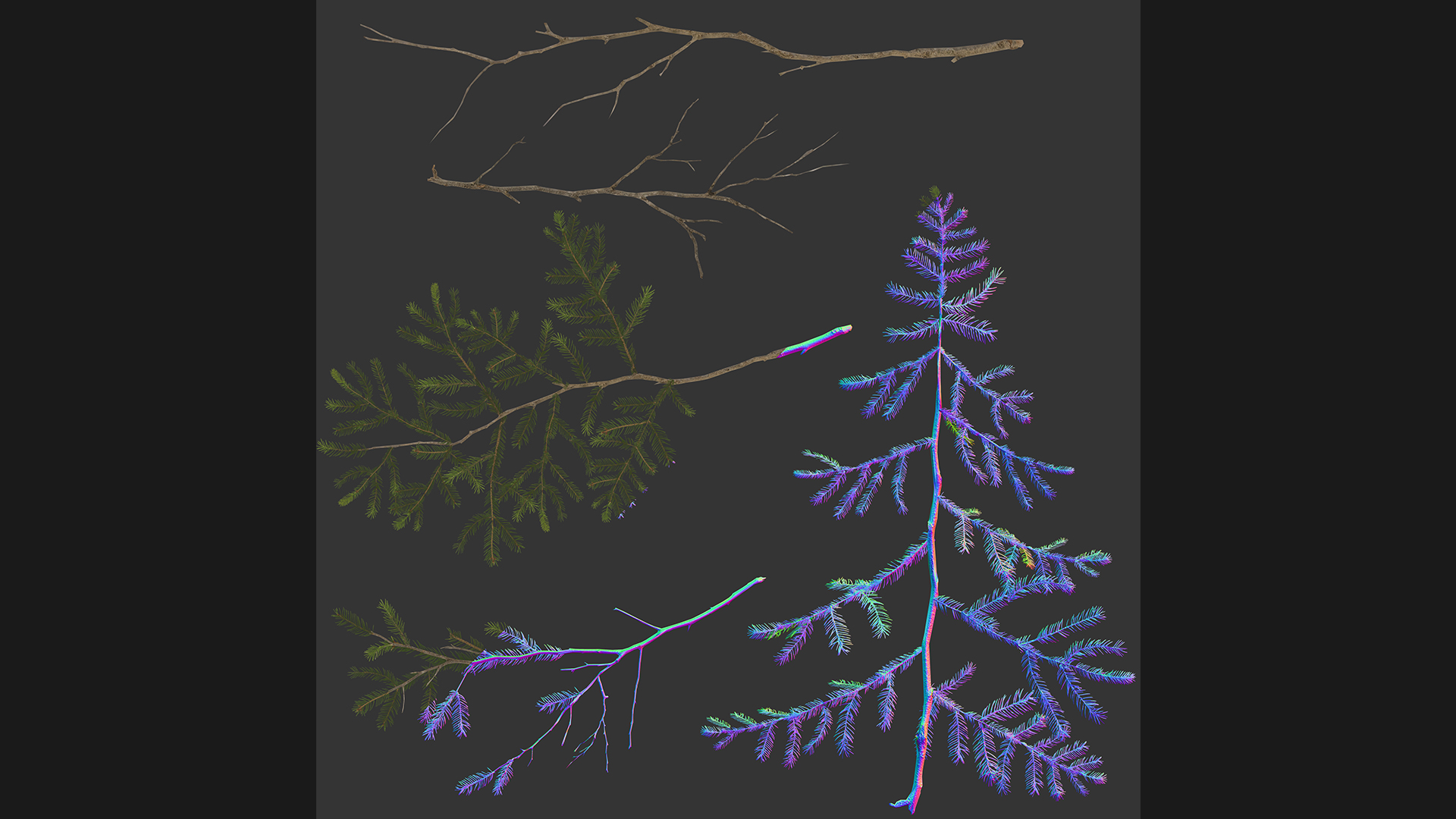 Q: Speed is a factor in any production – how easy and quick was it to use and modify Megascans assets, surfaces, and atlases?

AB: I joined the Bluepoint team about 9 months before we were due to be finished with the game. When I joined, there was a really rudimentary library of placeholder vegetation; a few grasses for testing our GPU system, and a few trees and shrubs to mirror what had been in the original. I didn’t have a whole lot of time to finish what the team needed. Being able to use Megascans was invaluable for me. I didn’t need to worry about a major time sink when making vegetation that can take up half my time: making the leaves themselves. 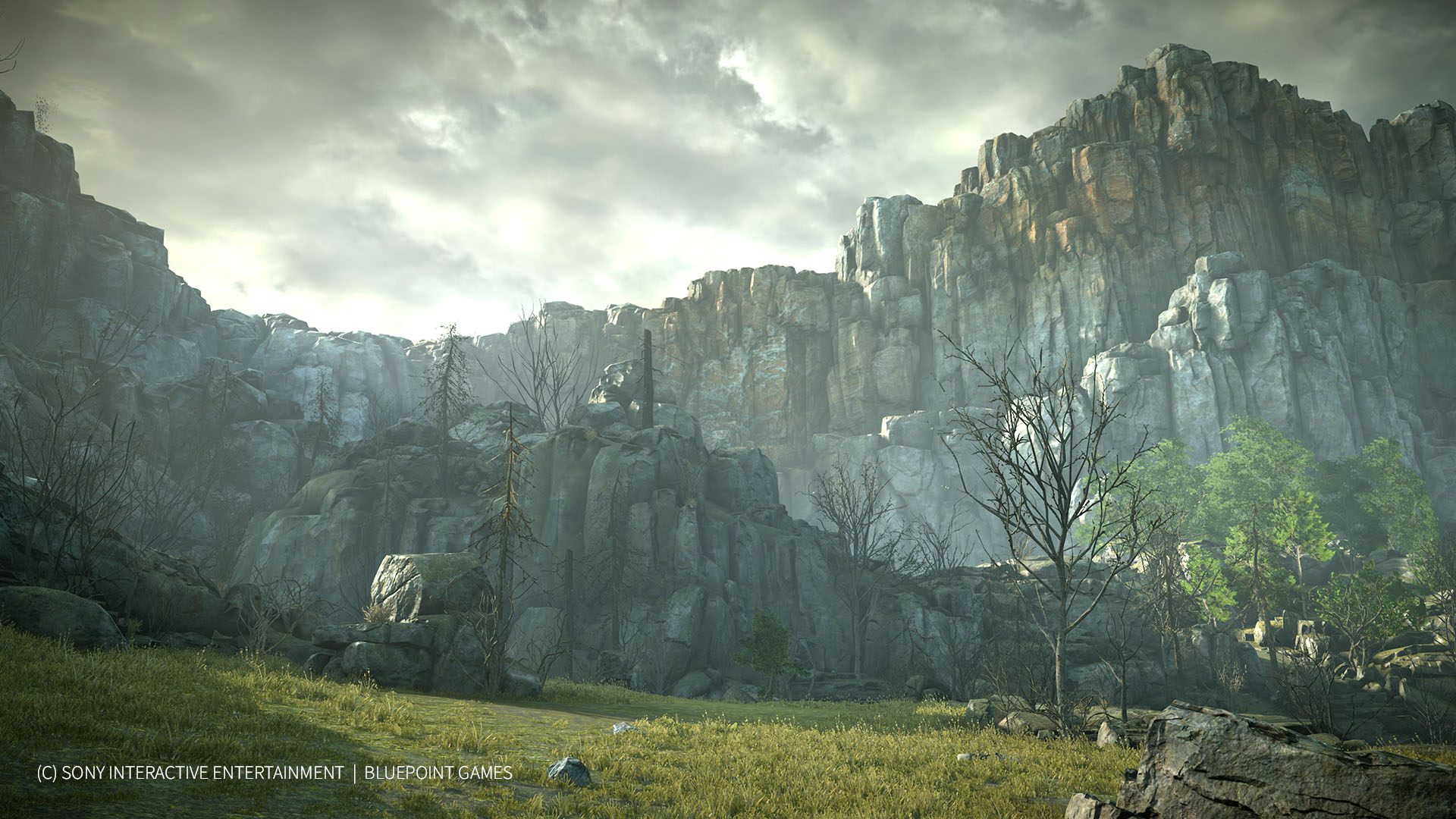 Having Megascans removed the time needed to sculpt all of these leaves by hand completely off my shoulders, and allowed me to focus more clearly on creating a larger breadth of vegetation. In general, the atlases are set up to be used just how they are or they are laid out in a way that makes it incredibly easy to bake them down into new atlases. 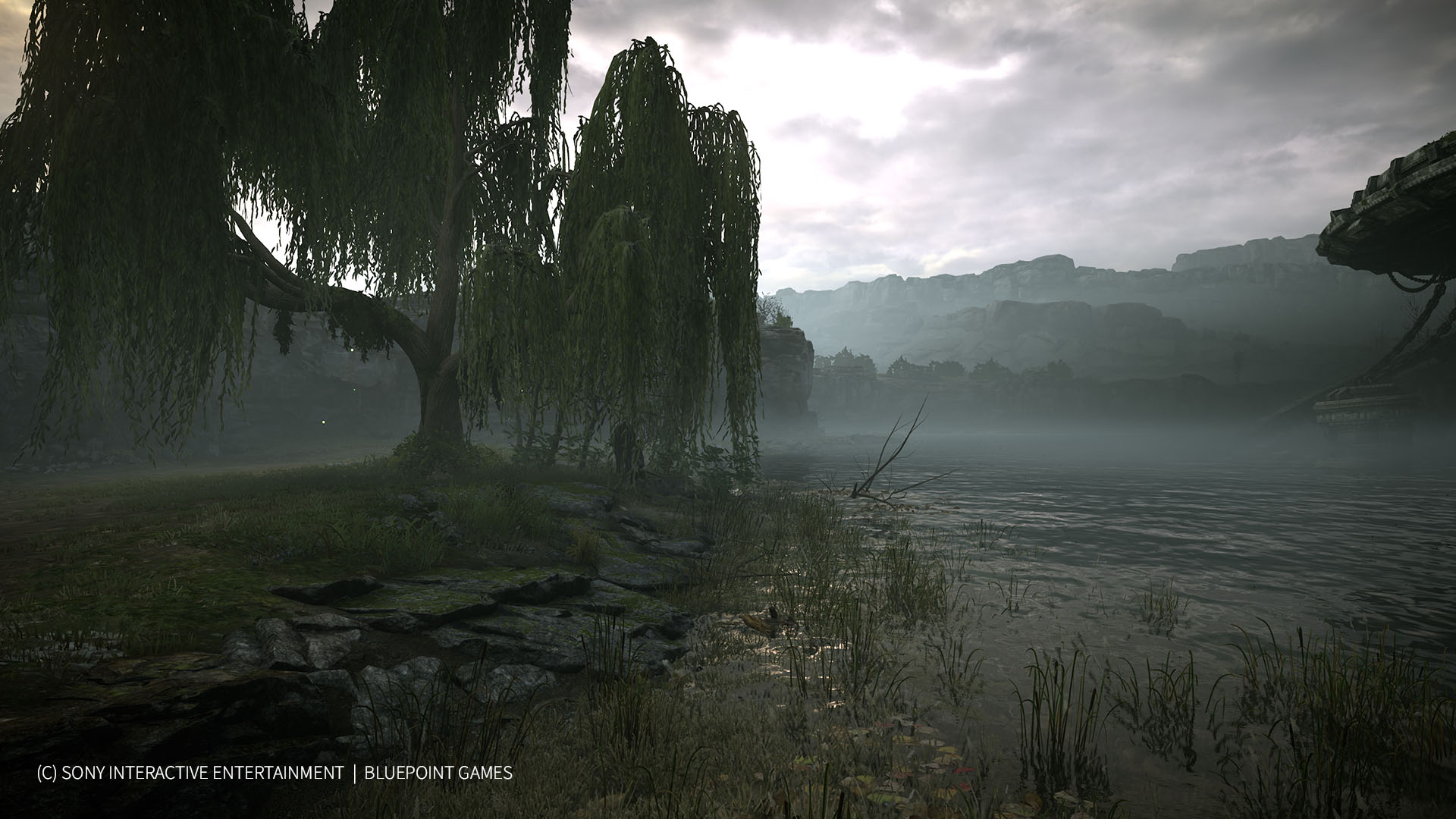 All of the grasses in the Shadow of the Colossus remake started out as one of the many Megascans atlases. They were laid out on individual planes, bent, twisted, arranged and baked down into a totally new atlas with all of the amazing scan detail intact.

Q: How well did Megascans work with the Bluepoint Engine?

AB: In general, I think Megascans worked well with the Bluepoint Engine. Every engine is a little bit different in how it renders and lights assets. 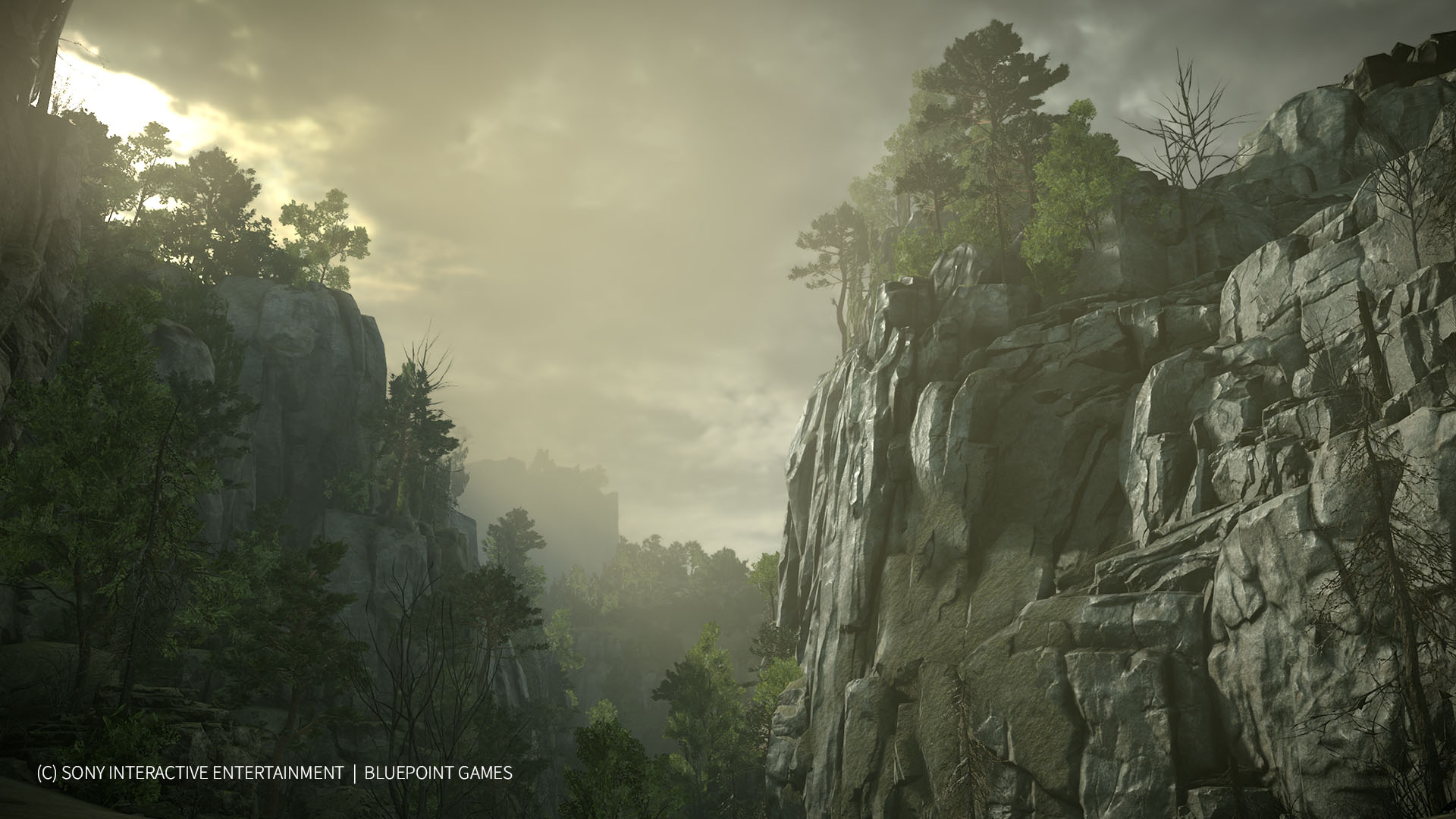 Q: From a technical standpoint, what were the greatest challenges to you and the other environment artists? Were Quixel tools able to address them?

I think our biggest challenge was that the normal maps usually needed to be edited to get the impact I wanted from them. Fortunately, Quixel Suite has a lovely little tool in called NDO, that helped me with that! We also found that sometimes the roughness values did need to be adjusted to get the right effect.

PBR die-hards may hate me for saying this, but sometimes, even when the roughness values may be real-world correct, they may not be as interesting to look at in a game world – and this is especially true for vegetation. I found myself often decreasing the roughness values to get a brighter sheen on a lot of the vegetation. This helped it stand out from the world around it. In reality, plants are pretty matte. In our minds though, we often think of plants being shiny and smooth. 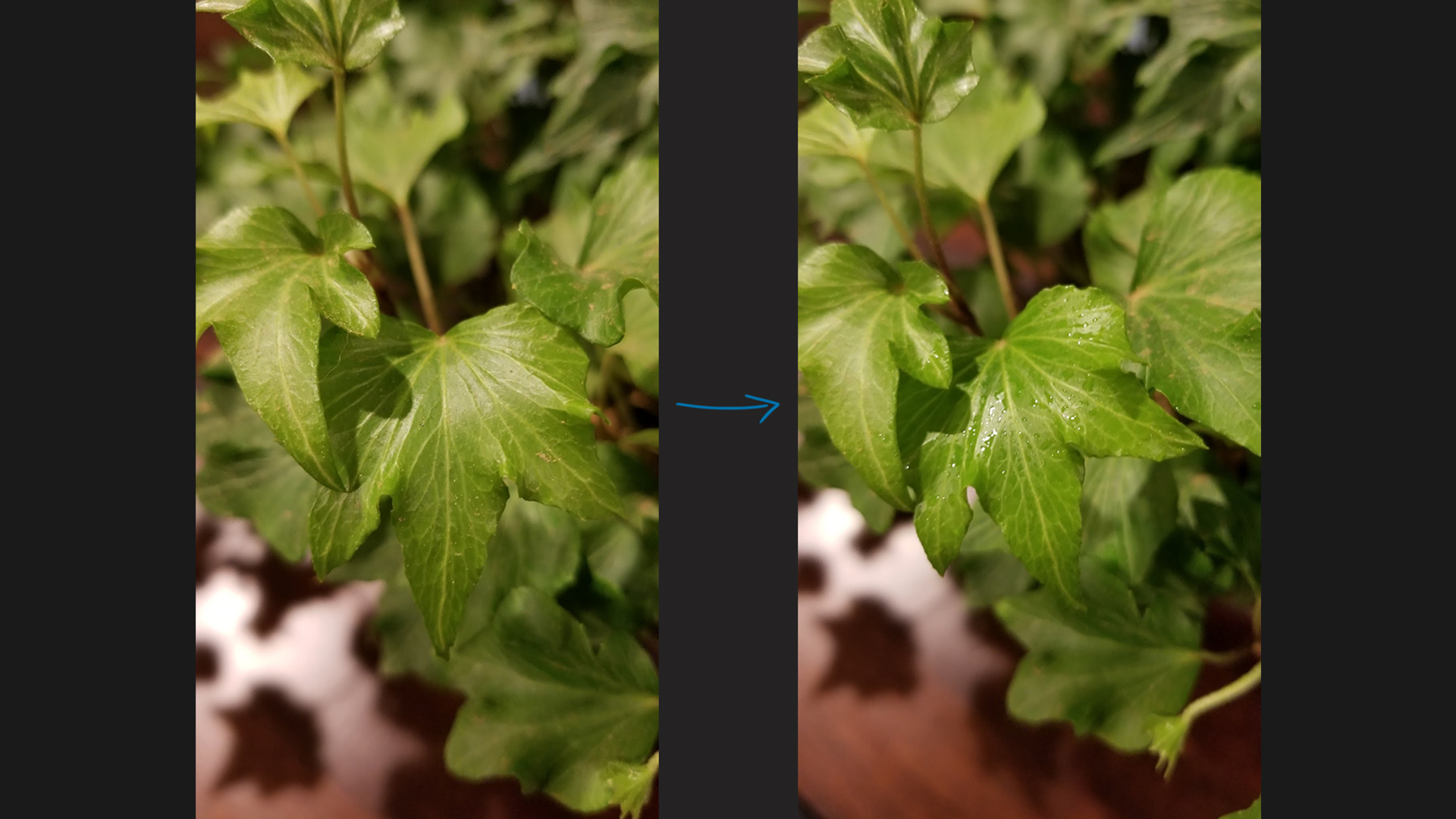 Q: SotC features a breathtaking array of foliage and vegetation. Did you find the library to be versatile enough to meet this challenge?

AB: I definitely think so. The library has a multitude of atlases that allowed me to create foliage that maybe the scan hadn’t even originally been. I know that while creating the willow tree, for instance, I couldn’t really find much that looked like a willow tree leaf, to begin with. So I started to look at the existing atlases with a more out-of-the-box mindset and ended up using an atlas scanned from a Canna lily. The basic shape was similar, and the value of having the scan data outweighed the fact it wasn’t exactly like the willow tree leaf. The Megascans atlases really allow for so much more than what they began as if you start to view how they can be used in that way.

Q: This may be a tough one, but what were your favorite levels to have worked on?

AB: The really dense forests were definitely my favorite. And there were far more assets that needed to be created for these areas. When you’re building a level like that, there really is an amazing amount of complexity in how ecosystems grow that you need to recreate in 3D. It’s not just the trees and bushes that need to be made, but all of the micro foliage that covers the ground, as well as leaf or needle cover and dead vegetation. 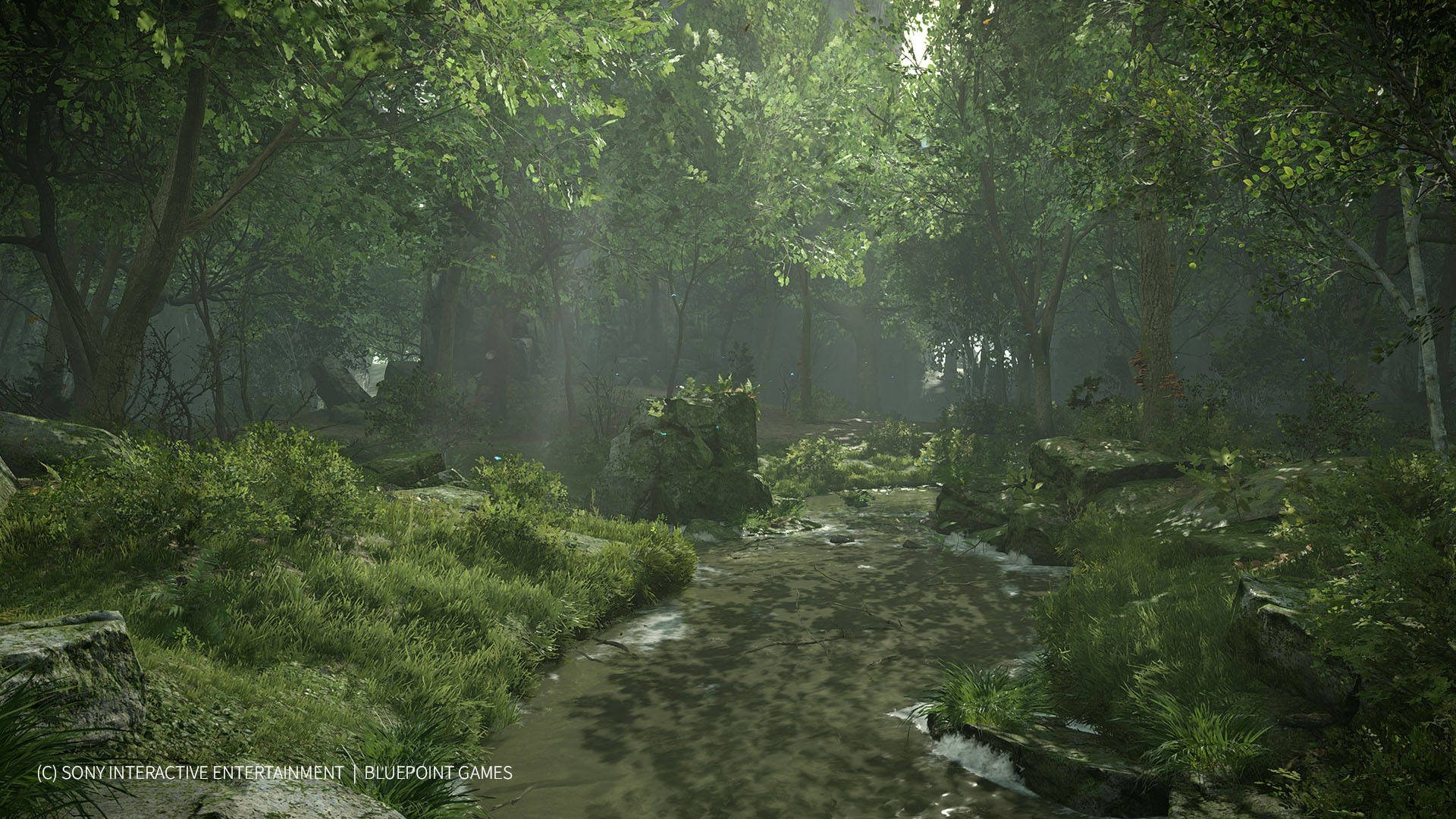 Q: Are PBR-calibrated scans the way of the future in your eyes? Tell us how you think Megascans is changing AAA workflows.

AB: Absolutely. Scan data realism blows away what I would have been able to create in a reasonable amount of time in this industry. It helps to raise the bar of realism for what we can accomplish in games, which I feel is a goal for developers and players alike. The tools available in game development are constantly changing, updating, and striving to make our lives as devs easier. So expectations are becoming ever greater. Megascans is an invaluable tool that I can only see as becoming more important as time goes on. You really can’t get anything better than a real object transferred into 3D.

Discover Alexis’ work, as well as that of her team over at ArtStation — where you’ll find various breakdown shots and scene deconstructions posted by the artists. 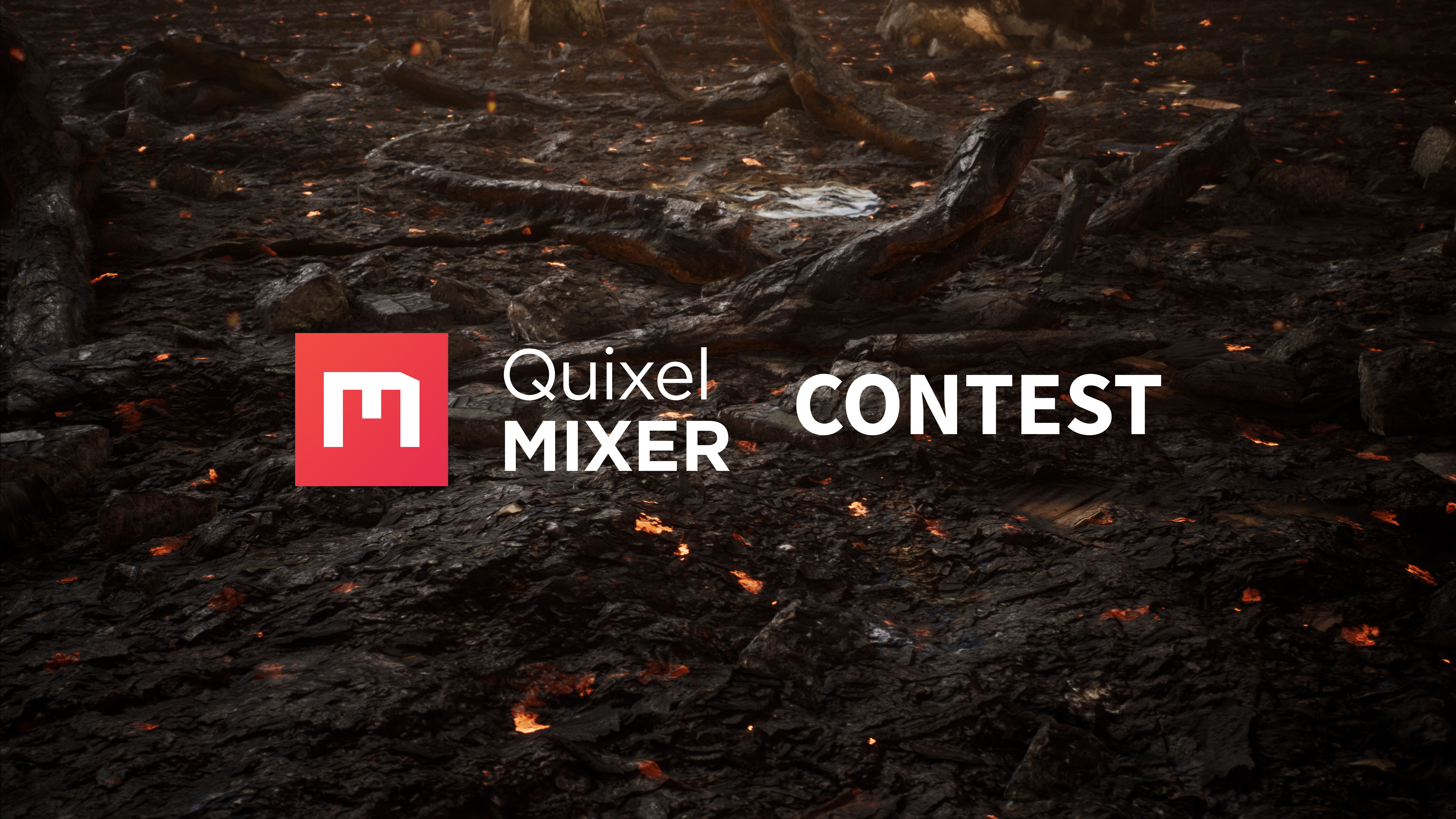 Quixel partners with Apple to push the boundaries of 3D